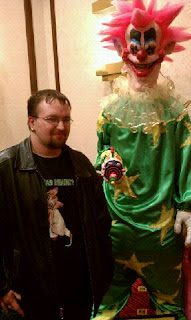 So I went to my second Horrorhound Weekend this past Saturday. For the uninitiated, Horrorhound is a horror magazine somewhat akin to Fangoria. The Horrorhound week is a horror convention they host in Indiana once or twice a year. They bring in a number of celebrities of the genre, host screenings, have concerts, and sell lots of merchandise. This was my second year. A large amount of the fun for me is just walking the dealer room and looking at the many sights. The dealer room is packed with interesting cosplayers, artwork, independent film makers trying to sell their films, and many of the lesser known celebrities. Amongst the celebrities this were none other than the stars of the Boondock Saints(the 'saints' and Rocco), the ever present Lloyd Kaufman of Troma, and one of my childhood heroes Corey Feldman. 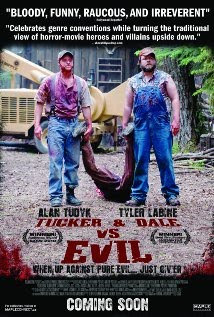 Perhaps the biggest highlight of the show for me was a screening of Tucker & Dale vs. Evil. This little film caught my attention a while back when I happened upon the trailer. I was quite upset to find that it had not yet found a distributor, meaning I had no guarantee that I'd be seeing it anytime soon. The basic premise of the film is that two hillbillies buy a summer house in the middle of the woods. They run into a group of vacationing college kids and a series of misunderstandings lead the college kids to believe that Tucker and Dale are serial killers. When the efforts of the college kids to defend themselves backfire with them inadvertently killing themselves it confuses things immensely.
I enjoyed the film, overall. The characters of Tucker and Dale were well played and felt genuine. The college students felt more generic, lifted from any stock slasher film. That said, they don't need to be anything more for the purposes of this film. Two of the college group are given further development. Allison is the girl who the title characters save from drowning. She ends up being very kind, down to earth, and open minded. It is enough to make you wonder how she ended up with the rest of the group. Then there is Chad; he is the impetus behind the college kids leading the unintentionally suicidal attacks, and it is quite obvious that he's got a screw or two loose from early on. The plot drives itself nicely. It is sufficiently humorous and suspenseful. I found the ending a little predictable, but I can't fault the film for that. I would recommend this movie for any fan of the horror genre, especially those who enjoy humorous satire along the lines of the Evil Dead trilogy or Idle Hands.
Posted by Spleenmuncher27 at 2:10 PM