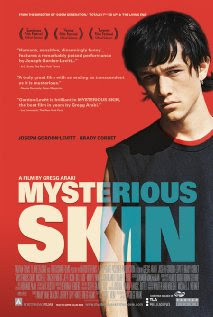 I watched a little film last night called Mysterious Skin. This movie is the work of the twisted mind of Greg Araki. Allow me to preface this review with a warning of sorts. Because they pull no punches and don't shy from the offensive, the films of Greg Araki are among my favorites. However, this same fact keeps them from being for everyone. If you are homophobic or easily offended I do not recommend this film.

Mysterious Skin is the story of two boys coping with the same childhood trauma in very different ways. Neil is a gay prostitute that doesn't exercise the sort of caution that his particular profession should require. He lives with his loving but oft absent mother, and has two close friends who both pine for him; Wendy a childhood friend and Eric another teen dealing with being gay in a small town. Brian lives with his mother because he seems to have never completely grown accustomed to the outside world. He is haunted by memories of lost time as a child, and is convinced that the memories he is missing are of his abduction by aliens. He spends his time investigating aliens and his childhood. When a dream leads him to believe he had once been abducted alongside Neil, who was on his little league baseball team, he goes to meet him only to find that he'd missed Neil by mere minutes, as he'd just hopped a bus to go live with Wendy in New York City. Over the next couple of months he befriends Eric and waits for Neil to return home to ask about their childhood trauma.

The story in this film is told quite well trough both Brian and Neil's monologue. Araki paints a vivid picture of this small town and the terrors through which each boy lived. The tone of the film is quite somber at times, but is broken up with just enough humor and concern to keep it balanced. There are quite a few depictions of Neil's intimate encounters; the worst of which are conveyed with explicit and disturbing detail, despite being subjects most people wouldn't even touch. Ultimately it's the relationships and characters that make this film. The friendship Eric forms with Brian is quite refreshing. Wendy's love for Neil despite everything she knows about him really makes here character endearing. Brian's story arch is quite interesting in and of itself. The final interaction between Neil and Brian is fascinating and powerful. I have to say that this film was interesting despite being difficult to watch at times. Overall I enjoyed it, and would watch it again, but it doesn't compare to Araki's other films. If you want to watch an Araki film, I would suggest the Doom Generation or Splendor. The latter is even relatively tame, content wise.
Posted by Spleenmuncher27 at 3:27 PM