I Hope They Serve Beer in Hell... 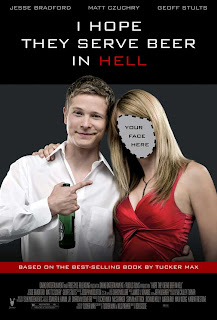 I Hope They Serve Beer in Hell, is a film based on the somewhat autobiographic tale of Tucker Max. If you don't know who Tucker Max is, just know that he's a womanizer who is entirely full of himself. I feel it is important that I say now, that this movie is likely to offend you. As a matter of fact, unless you have the capacity to enjoy over the top offensiveness that I do, it'll be hard to enjoy this movie. With that warning in place, what we're left with is the story of Tucker taking his friend Dan out for his bachelor party. They are joined by their friend Drew, who has a distaste for women since he walked in on his ex-fiance going down on a rap star somewhat akin to Bubba Sparx. The three travel to a strip club out of town where they run into a fair amount of fun and trouble. Tucker's selfish ways lose him Dan's respect, and he has to try and redeem himself if he wants to save his friendship and attend the wedding.

What I like about this movie is witnessing the life of some shameless people. Tucker's attitudea on women are short sighted and selfish, but they're dwarfed by Drew's militant misogyny. Drew is clearly suffering and using his attitude as a defense mechanism, but some of his outlandishly politically incorrect lines had me laugh my ass off. Next to him Tucker seems like a nice guy. I loved the characters in this movie, if for no other reason than I love characters that are good at their core but have such a horrible outward presence. I am also a big fan of the story of the redemption. Both Tucker and Drew have to let down their guard and be truly decent at some point in this movie. The few touching moments aside, this movie is quite fun for the moments that exaggerate how mean spirited these two characters can be, and how the straight man, Dan, and the people they encounter react to it. One side note; Drew is played by Jesse Bradford, who plays Joey in Hackers. which is one of my all time favorite movies.
Posted by Spleenmuncher27 at 11:00 AM