'We're Throwing Science to the Wall Here to See What Sticks' 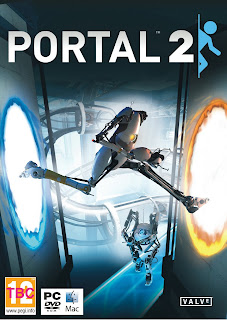 In 2007 software company Valve released a game called the Orange box. It was a collection of 5 games, and while the whole thing was considered a great value, despite being mostly rehashed content, I kept hearing about one game, Portal, in particular. This game kept getting praise, but was also warned to be 2 hours long. At the time, it was the only game on the Orange Box that interested me, and at a full $60 it seemed a bit steep for me. It was a song that finally made me take the plunge. Two gaming podcasts at IGN, Gamescoop and Podcast Beyond, played the song, "Still Alive" on their podcasts the same week. Let me skip ahead, and say that the song was one of the most clever and funny songs I had heard, but I highly recommend playing Portal before listening to it, as it will mean much more to you after that experience

Just this week Portal 2 was released. Reprising your role as Chelle, you awake after hundreds of years in stasis to find that the Aperture Science labs in a state of extreme disrepair. You are guided by a newly introduced AI, named Wheatley, in an attempt to escape the derelict labs. In an attempt to find an escape pod, he accidentally awakens GlaDOS, the homicidal AI that ran the facility before the indecent in the last game. From that point forward there's an actual force to escape in the game. A few plot twists later, you find yourself exploring the hallways of the original Aperture labs. You're given the opportunity to take in the history of Aperture Science and become acquainted with the founder, Cave Johnson, through a series of charismatic prerecorded messages. The exploration of the forgotten chambers introduces you to a few new features, such as a super bounce gel, and a speed amplifying gel. Eventually you make it back to the current labs and have to devise a plan to survive and set things right, before the building explodes.

I would recommend this game to anyone with even the slightest interest in gaming. There is so much to find in this amazing world, that you'll want to take your time exploring it. There are messages sprawled on walls from test subjects before you as well as fascinating motivational and safety posters covering the scenarios amazingly unique to Aperture Science. The characters in the game are humorous and very three dimensional. The game play is challenging but overall rewarding and quite fun. I play a lot of games, but very rarely do I want to play them again. As soon as I finished Portal 2 I was ready to go back and play through some of my favorite parts again. I can really give it no higher praise.
Posted by Spleenmuncher27 at 5:33 AM