So I haven't posted in a while. The thing about the Ponder Couch, is that it is comfy and promotes naps and procrastination every bit as much as the viewing and reviewing of nerdy goodies. In my absence from the blog, however, I'd like to think that I have been amassing experiences and materials to write about. I watched a movie that I was warned not to see. It is currently considered one of the most offensive horror movies ever made, and it has certainly earned the hype. I won't call it the reigning champ, however, as I have faith in humanity to continue to make filthy movies that are more horrifying still. I assume that people may be irritated that I haven't said the title of said film, and I do this, because I don't want to risk actually publicly recommending in any way shape or form. 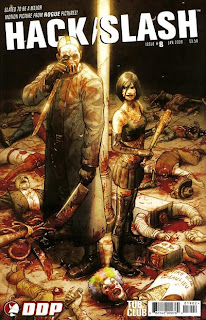 wrote, I attended a comic trade show, and participated in Free Comic Book day. Yes, I am a comic nerd. As a result I am quite fond of a new comic series (by which I mean new to me) Hack/Slash. The Basic premise of the series is that Cassie Hack hunts down Slashers, which are supernatural serial killers much like Jason Vorheez, with her partner Vlad, who resembles Jason. She fell into this business after surviving a run in with her first slasher, The Lunch Lady, who was her own mother. This isn't terribly new ground, as the scooby gang, amongst others, have been hunting down baddies for quite some time. That said, I love the books and highly recommend them. Cassie and Vlad are characters you will care about, and as a long time horror fan with a special fondness for slashers, I enjoy seeing the original slashers they come up with. 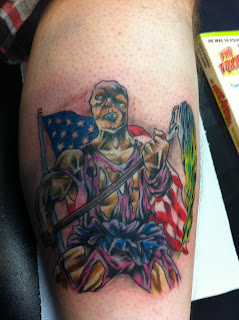 Something else I have gotten up to is a new tattoo. I have always had a love for be movies, and some years back, I had Freak, from the Washington St. Artistic Design tattoo the Army of Darkness painting on my left calf. As soon as that tatt was finished, I knew I wanted a companion to bookend it on my other leg. Just under two weeks ago I went back in to see Freak, and had him tattoo the Toxic Avenger on my right calf. Thus I cemented Troma Entertainment's place in my heart, with a permanent place on my skin. The tattoo, turned out amazing, and I cannot wait to show it to Troma President Lloyd Kaufman at the next convention I run into him.

I think that wraps up my post for now, but I have more to write about, and I hope to get a part 2 in here soon. Thanks for reading!
Posted by Spleenmuncher27 at 2:48 PM No comments:

Hello all my name is Geoff and for those of you who know I am a massive nerd. My ponder couch contributions will certainly focus on all things nerd from video games to movies. One thing I will try to incorporate is a request system. Add me on Facebook or send me a message on a topic and I will look into it. I want to thank everyone for reading and I look forward to providing informative entertainment as I like to call it.

" A friend asked if I wanted a frozen banana. I said no, but I want a regular banana later so... Yes. " -Mitch Hedberg

P.S. Yes I will be ending all posts with a random quote usually pertaining to the subject matter.
Posted by Jeffery at 11:39 AM 1 comment: 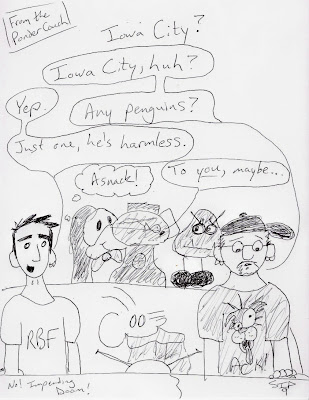 A few weeks ago Princess Melawesome and I visited my cousin Meryl Irwin in Coralville, IA. She showed us around nearby Iowa City, IA. 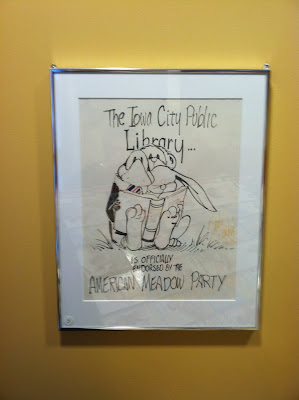 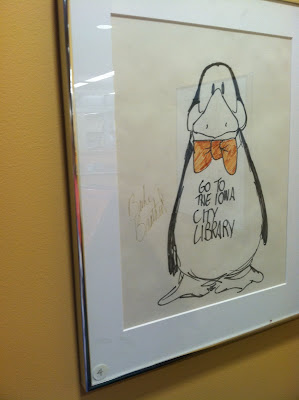 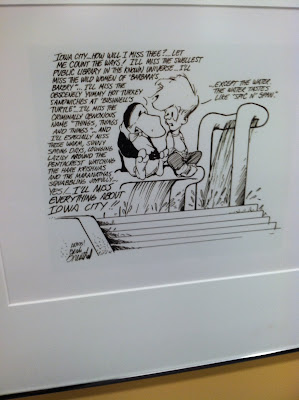 I've been a fan of Breathed's work for as long as I can remember (through my Dad, Hemry). So this was quite exciting for me. Almost as exciting as the time I met him and had him sign a book for me and one for Hemry! 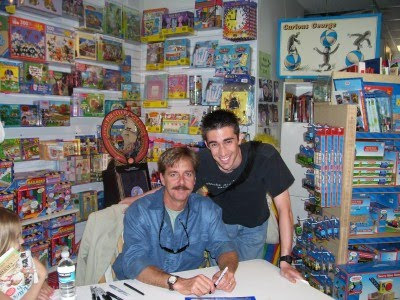 Meryl then took us to a comic shop and a book store . 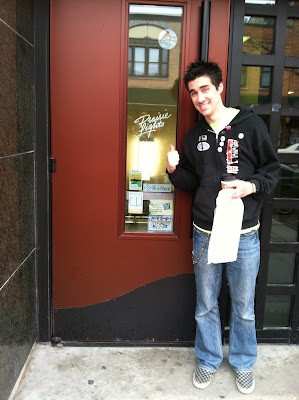 The store also had some Breathed originals on the wall. (I didn't realize there were originals, so I didn't take any pictures. Poo.) When I got home I found out that Breathed lived there for a while and based Bloom County pretty heavily on Iowa City. The boarding house that most of the characters from the strip is based on an actual house in the city (which I'll find when we visit Meryl next), and the Bloom County radio station's call letters are those of an Iowa City station, and the Bloom Picayune is based on an Iowa City paper. 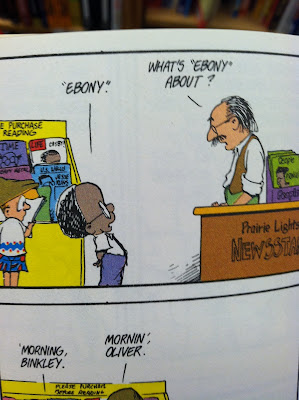 So that was a welcome surprise at the end of a long, wonderful trip to the Dakotas and back. I hope to visit other comic strip-related points of interest. If and when I do, I'll make sure to blog about them.

Oh, for the strip at the top of this post to make sense, it helps to be familiar with Opus the Penguin from the Bloom County, Outland, and Opus comic strips and my strip Ponder and Enlightening (the strip of which this site is, in fact, a spin-off!) The penguin hilarity begins HERE!
Posted by sethifus at 9:15 PM No comments:

Friend of the Ponder Cocuh

So one of my oldest friends has started doing some youtube reviews, and I would like to present them here. This is Bryan Trusty's review of the Sega Master System converter for the Sega Genesis. The man has always been naturally entertaining, and it comes through here. Please to enjoy.

Posted by Spleenmuncher27 at 7:43 PM No comments: