Double it, you still get zero 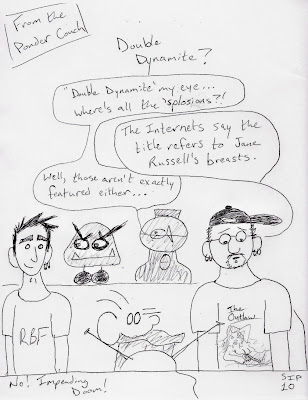 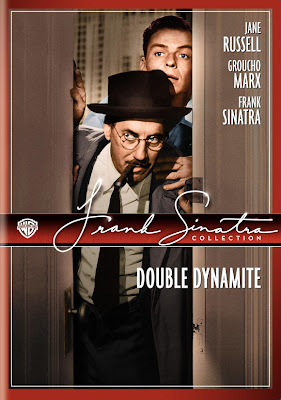 I saw this movie sitting on the shelf at my local library and thought "I like Groucho movies, I like Sinatra songs, I'll watch it!" And I did.

It was fun. The story is kinda boring. It's about Sinatra thinking some money he won betting on horses or something was stolen from his girlfriend's bank. This sucks because he only made the bet because she wouldn't marry him because he was poor. Something like that, I don't know, it was hard to pay attention.

The reason I recommend this film is because Groucho Marx is in it. I love the Marx Brothers, and while this movie is not as good as any of the Marx Brothers movies (in my opinion), Groucho's part is pretty close to the characters he portrays in said Marx Brothers movies. His delivery might be a little slower and a smidge less energetic, but it's still Groucho! I missed Groucho, and it was nice to see him in a new-to-me movie. He also has this odd character trait of delivering appropriate quotes from books and plays and such. Odd... but not uncomfortably so.

I also enjoyed both of Sinatra's songs. The first sung with Groucho (!) and the second with Jane Russell. Good stuff.

If you're a fan of Groucho Marx or Sinatra song styling's, check it out.
Posted by sethifus at 8:12 PM