Posted by sethifus at 5:52 PM No comments:

If you were a pseudo-rebellious youth in the late 90's, like myself, there are probably certain things you remember.  Backwards ball caps; Actually Thinking Limp Bizkit was cool; Watching Beavis and Butt-head.  One of the most prolific things I recall from that era was "Fire Water Burn," by the Bloodhound Gang.  My introduction to this song was likely similar to that of many of you,  the censored radio version that used this amazing Donkey bray to cover the word 'motherfucker.'  It was such an entertaining edit that when I finally got my hands on the album I was almost disappointed by the unedited cut. In 1996 the Bloodhound Gang put out their sophomore effort, One Fierce Beer Coaster.  Despite being their second offering, this album was the one that saw Bloodhound Gang to widespread fame.  As mentioned above, "Fire Water Burn" became a pop culture phenomenon, but the album also produced the radio singles "I wish I was Queer So I Could Get Chicks" and "Why's Everybody Always Picking on Me?"  The Album also features a remake of Run DMCs "It's Tricky" and a collaboration track with Rob Van Winkle, better known as Vanilla Ice, called "Boom."


I am well aware that this album is 16 years old, and may have reached the entirety of its popularity at this point.  That being said, I love this album front to back.  It holds up to this day.  The songs are energetic, funny, and altogether enjoyable.  The Bloodhound Gang are really ahead of the game here mixing elements of Hip Hop, Punk, and even hints techno.  They were blurring the lines between genres before the practice became popular and common place.  I also would make an argument that they were early pioneers of the nerdcore subgenre, with songs about Mr. Rogers, Homer Simpson impressions and countless references to Star Trek, Mash, and other pop culture staples.

I cannot recommend this album strongly enough.  The offensive low esteem fueled lyrics teach a lesson that I have taken to heart, which is that if you accept that there are horrible things in this world, and learn how to laugh at them, you may just make it though this life in one piece.  To quote the group themselves, "There's no reason to live, but we like it that way."

The Other Boy Who Also Lived...

Posted by sethifus at 9:12 PM No comments:

A Monster of a Friend

Posted by sethifus at 6:52 PM No comments:

Spike the Betta Fish's review of "The Avengers" 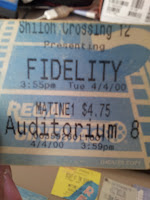 One of my all time favorite films is High Fidelity.  This movie has had a far deeper impact on my life than should be humanly possible.  In it there is a line spoken by John Cusak referring to the vinyl records as “Fetishized possessions.” This is a concept I have always found fascinating to which I can relate.  I have many fetishized possessions, but the one that concerns me now is a collection of movie ticket stubs I have kept since as early as 1998.

I feel it is important to mention, that I hadn’t chosen it for this reason, but upon leafing through my ticket stub collection, I find that I have one for when I first saw High Fidelity in theaters.  The collection started as an extension of my OCD tenancies.   To this day, I have trouble throwing away receipts and the plastic name tags they stick to the top of DVDs.  Ticket stubs were just another one of those things, but at the same time, they were always different.  Even if it is only seeing a movie, a ticket stub is a physical reminder of a moment in history.  I can look at certain tickets in my collection and have them pull up a memory as vivid as if it had just happened yesterday.  Some of the best points in my life have been punctuated with movies; first dates, birthdays, points both high and low in my life, and the relationships I’ve kept with my friends over the years. 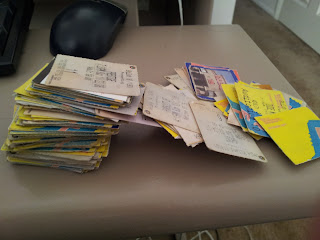 I can hold my "House of 1000 Corpses"  stub and remember one of the last times I spent with my cousin and good friend before he moved out to Virginia.  Elsewhere on the Spectrum is the ticket to "Freddy got Fingered", which is a reminder of a strange outing with my then girlfriend and my grandmother, who for some reason wanted to see this over the top film.  I often go through my collection and reminisce. It also is an interesting visual guide to the changes made to tickets at the same theater over the years.  Some of these theaters I have been frequenting for at least 10 years. 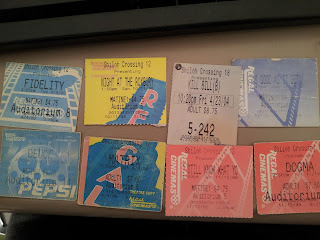 Recently Seth, friend and Ponder Couch mate, gave me an album designed specifically for ticket stubs.  It seems like it may have been designed with a larger ticket stub in mind, but I am slowly filling it up and I am enjoying the new way to display and protect my collection.  I may add pictures of the album as it fills out.
Posted by Spleenmuncher27 at 1:00 PM 1 comment:

This is the "Ponder Sofa"... found here: http://www.moevdesigns.com/Ponder_Leather_Sofa_p/8326.htm
Posted by sethifus at 9:20 PM No comments:

Vote for Angie every day until the 11th!
Posted by sethifus at 6:42 PM No comments: