What some call art

I stumbled across an old sketch book today.  I am not an artist by any stretch.  I have failed miserably at stick figures, but I once fell victim to a computer drawing class that ended involving absolutely no computers.
Anyways, the following are a few of the sketches I found surprisingly decent  considering I was involved. 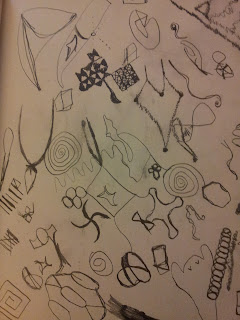 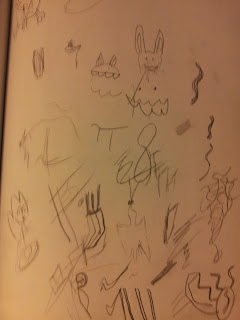 These were a daily class exercise.  We were supposed to put pencil to paper for 10 mins and draw freely without making established forms.  I struggled greatly with this, because I have long been a doodler and established things were my favorite to draw.  My mind crafted words, not images. First is the closest I ever got to a free form drawing but even there, it looks like I drew a ghost.  On the bottom is a later page when I had just succumb to doodling.  There are a couple of attempts at Max from Sam and Max, a little sonic the hedgehog, and my old reliable the spaceship Euch from the Green Jello records. 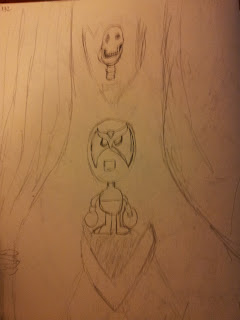 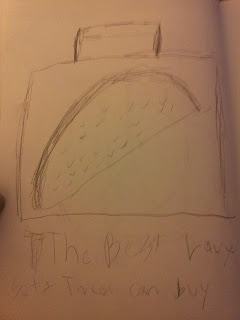 The first one here is Strong Bad on some kind of pedestal, with what I can only assume is a mounted skull of Yoshi from the Mario games.  The one adjacent isn't really all that easy on the eyes, but the taco briefcase and the slogan, "The best lawyer soft tacos can buy," just make me giggle.  I don't know the exact episode, but the soft taco lawyer thing was born in a Strong Bad email somewhere, and hence the pairing. 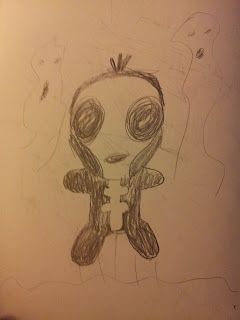 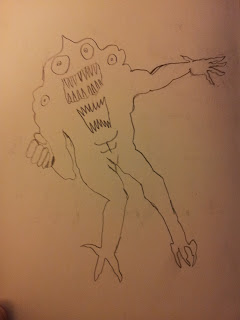 These cute cuddly bastards are Spooky, that thing what squeeks, and Carnage, respectively.  Spooky is a little squeaky toy from the comic series I Feel Sick by Jhonen Vasquez.  Here he seems to be joined by a few disembodied spirits. Carnage is from the cover of the Green Jellö album 333. 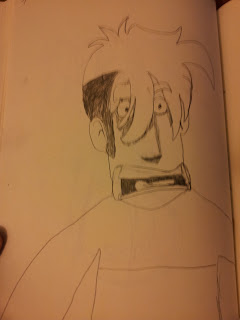 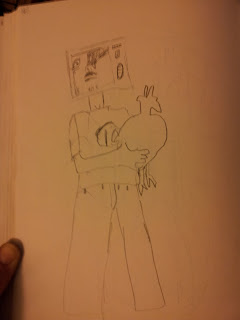 On top here we have Tycho Brahe from the Penny Arcade web comic.  I am quite proud of this one, as it looks fairly close to the original.  Next we have an odd TV head guy from a Tank Girl comic.  I thought he was fairly interesting and turned out well. 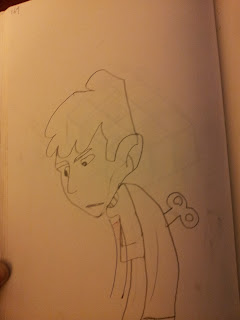 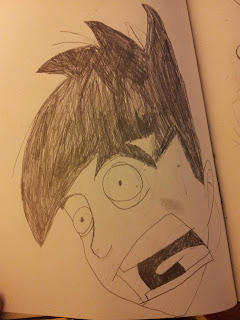 The two here are both John Gabriel, Gabe, from Penny Arcade.  The first one is modeled after an earlier iteration of Gabe.  The second is the modern day Gabe.  Obviously I am quite fond of Penny Arcade.  It is a great comic series that is available online for free.  Gabe is the character I identify with most in the strip. 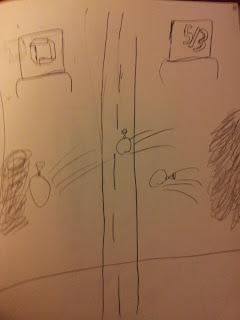 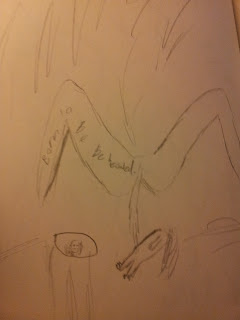 These two are meant to illustrate how my mind works to some extent.  On the top, I have depicted a scenario where the associates of two competing banks battle with water balloons.  This is based on a real life street that has these two banks across from each other.  I just had to imagine there was at least a prank war on the scale of an 80's comedy.  Then on the bottom we have a crude drawing of a woman giving birth two a baby whose head is immediately severed.  This was meant as a literal depiction of the song "Born to be Beheaded," by Mindless Self Indulgence.  I am aware that this concept is offensive, but I believe strongly that its good to be offensive some times. 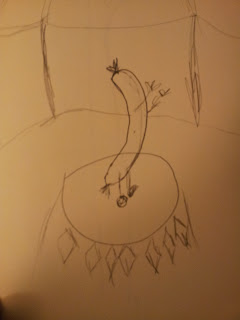 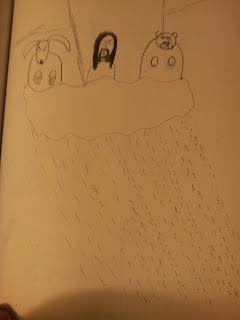 Finally we have the back-flipping hot dog from the concession stand ads they play at the drive in.  I love the drive in, and these cartoons really add an amazing nostalgia to the experience.  Finally I have drawn myself into the Ponder Cloud, Seth's creation that ultimately spawned this blog.
There you have it.  My art is not great, but hopefully not gut-wrenchingly bad.  Thank you for taking the time to read my narcissistic little article.
Posted by Spleenmuncher27 at 4:13 PM No comments:

Hey Guys, I know it has been a while since I posted a podcast on here.  Today I have a new one.  This is the first episode of a B Movie podcast that I had been planning.  On it myself, and my friend Malaria discuss the classification system, or lack there of, of B movies.  We cover the first B movies we had both seen, and various others.  I hope you enjoy listening to it as much as I enjoyed making it!

Also, check out Malaria's blog, where she reviews all kinds of awesome stuff!

Posted by sethifus at 5:55 PM No comments:

Mine is "Biker Mice From Mars".

It had similar elements: 3 humanoid brothers

who eat a certain kind of junk food for every meal, hot dogs instead of pizza. (I couldn't find any google pics of them eating hot dogs)

And they hang out with a cute, sassy human girl And they save the world from evil aliens

who have lots of sidekicks And there were toys and video games of all this stuff It even shared at least one of the voice actors from TMNT, Rob Paulsen, none other than Raph in the original series and Don in the 2012 series. Oh, and it had this guy

All-in-all it's not as good as Teenage Mutant Ninja (Hero) Turtles, but I still enjoyed watching it with my lil' brother and get nostalgic for it every now and again.


They did another updated version in 2003, but I didn't see any of it

Here's a cover of a song from one of my favorite online comic strips "Nothing Nice to Say". In said strip there is a band named The Negative Adjective. This is one of their songs. You can view the original strip here: http://mitchclem.com/nothingnice/307/
Posted by sethifus at 5:41 PM No comments:

So Wonka Candy. There was a couple books, then a movie, then another movie. They made candy to promote the movie. Everybody knows about this stuff, so I won't spend too much time on it. I'm going to do a quick comparison of the only two products that I can still find that were actual products in the books or movie. 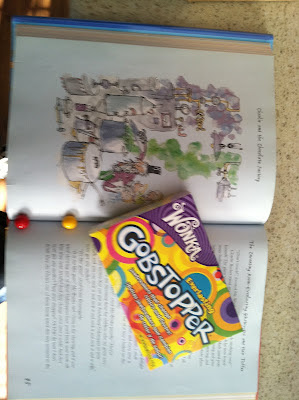 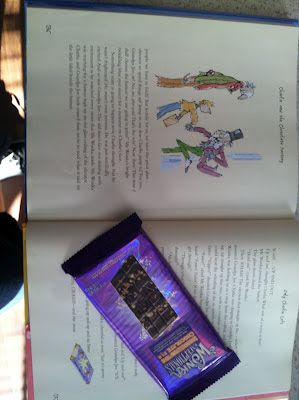 And the Wonka Bar/Scrumdiddlyumptious Bar/Whipple-Scrumptious Fudgemallow Delight, depending on the book or movie you like best. The Everlasting Gobstopper (gobstopper is another word for jawbreaker) looks like this in the first movie: 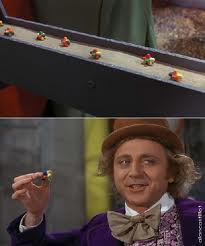 The book did not have any pictures of it, and I couldn't find any pictures of it in the new movie on google. But I think it basically looked like a normal jawbreaker, just like the defictionalized product. The one in the original movie looks to me like one of those Bumble Balls: And it tastes... like a jawbreaker. The Wonka Bar 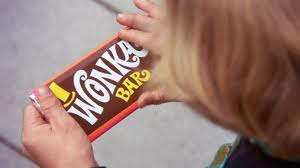 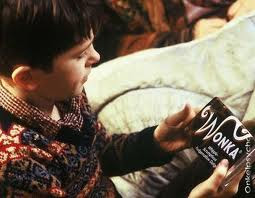 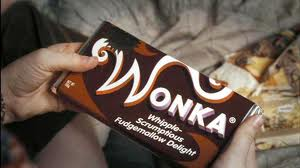 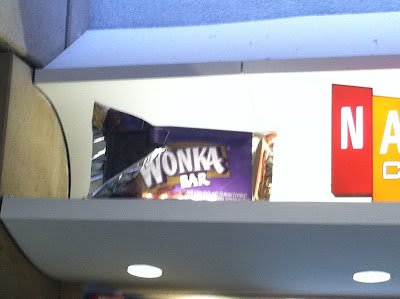 has gone through many changes over the years. I liked the one that had graham cracker in it. It was pretty good. The one you can get now: 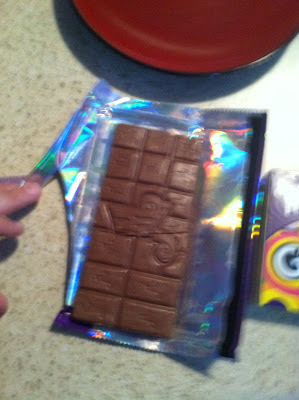 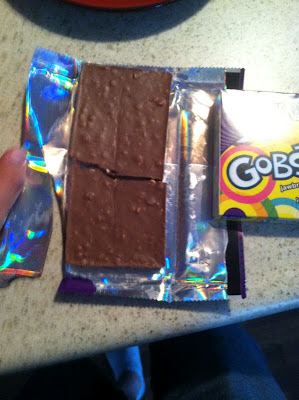 has little pieces of toffee in it, and I don't like that as much. The packaging is in the right color scheme, though. Which I appreciate. In all I like Wonka Candy, and as far as defictionalized products go it was one of the first I can remember buying and enjoying. It has been around as long as I remember and I don't see it going away any time in the near (or not too distant) future. Oh, and their new vending machines are pretty cool: 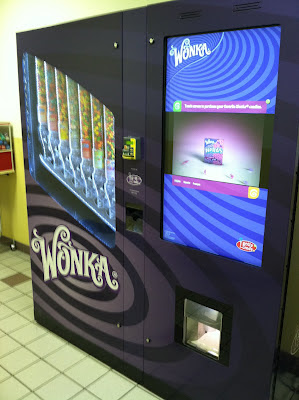 Posted by sethifus at 4:23 PM No comments: