Some videos of songs I wrote...

A cover of that one song from that one scene in Back to the Future!

A song from my Ponder and Enlightening comic sung by the Claudius puppet!


A new original song about lover or something.


A song about the Pitch Drop Experiment!

Posted by sethifus at 8:01 PM No comments:

Here are some more ideas I had to get out of my head. Hopefully someone will do something with them.

1. I work in a preschool so a good portion of my job is wiping noses. When I started working with infants and toddlers I realized that wiping a child's nose is the WORST THING YOU COULD EVER, EVER DO to a child. At least, that's what the children keep telling me as I try to wipe their noses.

I also noticed that children don't mind when you grab their face with a puppet, pretending the puppet is eating their face.

I put the two together in my mind and came up with the idea of a puppet you could use specifically to wipe noses. You pretend the puppet is eating, or "noming", their face and wipe their nose in the process. The mouth would hold onto a tissue, and the puppet would be washable.

I tested my idea with Peepers Puppets:

That worked pretty well. I'd like someone to make a puppet specifically for wiping noses. I don't know if it would work or how long it would work. But I think it is worth a try.


2. This last week was Dr. Seuss's birthday. I think a place that makes slippers should make slippers that look like the socks from Fox in Socks. 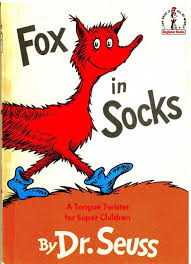 They look comfy as all getout and I would totally buy a pair.

3. Finally I have an idea for a commercial compaign for a certain sandwich chain. Many years ago they had a terrible commercial that involved one of their people who make sandwiches dancing as a rap song played about their new wrap sandwiches. I thought it was one of the worst commercials I'd ever seen. My friend Chris Hockley agreed with me and told me about his idea for a good sandwich commercial. Today I made that commercial:

My idea is that this specific sandwich chain could ask for people to make and send in commercials for them to use instead of their not good commercials (only one of their "funny" commercials has ever made me laugh, and I only laughed the first time I saw it). This would be much like what Doritos has done in the past. People could send them in via youtube or another video site.

Or they could set up a neutral background in each sandwich shop with a video camera that would link to a specific site and they could send in their commercials that way.

I don't know if they would want to do this, how much it would actually cost, etc. But I do know that it would result in better commercials than whatever they currently use.

That's it for now! More ideas as soon as I think of them.

Posted by sethifus at 5:01 PM No comments:

And speaking of commercials...

Here Princess Melawesome and I cover a couple local commercials from the Sioux Falls, SD area. 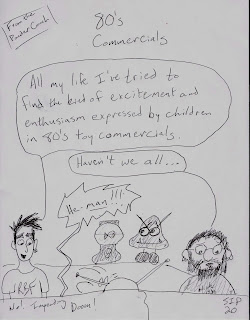