A Drinking Game for Korean Dramas!

Princess Melawesome and I watch Netflix too much. We wind down in the evening on most days on the Ponder Couch in front of something on Netflix. One of the things on Netflix is Korean Dramas. There are a lot of them. And, like American sitcoms, they are pretty formulaic. At least, all of them we have seen so far have been. And because they are so formulaic and use a lot of the same situations and ideas, they lend themselves to a drinking game.

Before I get to the game here is a quick list of the Kdramas we've watched so far: Super Rookie (my favorite), You're Beautiful (or He's Beautiful, or something like that), Secret Garden, Playful Kiss, Pasta, Boys Over Flowers, and we are in the middle of The Musical. 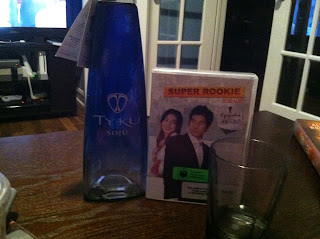 And now to the game!

Take a drink every time:

Or, if you're not a drinker, this could be an exercise game. You could do a push-up, jumping jack, sit-up, or whatever every time:

But I like Soju (see above picture) so take a drink every time:

1. A character asks another character something like "Do you want to die?!".
2. Someone says "Kre ohm". It means something like "that's right"... I think. It sounds like "Cray-ooom". They say it very quickly and often.
3. Someone says "Fighting" in English.
4. Someone says anything at all in English.
a. Take another drink if the other people around the person speaking in English acts like they are speaking English very well.
b. Finish your drink if their perfect English is actually difficult to understand without the subtitles.
5. If there are English-speaking "Americans" who are obviously not from America.
6. If there is a recognizable pop song in English in the background.
a. Take a second drink if there is a curse word in the song and it is not bleeped out.
7. If someone says "Aish!" (Iiiiii-eeeeesh)! This is an exclamation of frustration. They say it A LOT.
8. If someone drinks Soju. The only kind I've been able to find in Indianapolis is the kind in the blue bottle in the above picture. In the Kdramas it is usually in green bottles the size of beer bottles. You will know it is Soju if they are taking shots of it. And someone will probably mention Soju. If you can find it, I recommend trying it. It's kind of expensive, but it's much too easy to drink and actually kind of refreshing.
9. If someone is eating Ramen Noodles.
a. Take another drink if it is a rich person who has never had/doesn't usually eat Ramen.
b. Take a third drink if the rich person absolutely LOVES it.
c. Finish your drink if someone steals someone else's Ramen.
10. There is a long, reflective pause. The camera zooms in on one character's face and stays there for longer than necessary. No one will say anything. It will just keep going on.
11. If there is an unnecessary flashback. It might be something that just happened right before the flashback. It might have nothing to do with the scene. They just happen.
12. If somebody searches for a lost item, say a necklace that is the only thing they have left to remember their dead mother, in the water. It might be a pool, it might be a moat around a rich guy's house, it might be in the ocean. All that matters is that some character will look for it and it will take at least all night and most of the next morning to find it.
13. If one of the main characters gets hurt by the weather. Maybe they are outside too long in the cold. Maybe they got rained on.
a. Take another drink if they weather really wasn't that bad, but they got hurt anyway. Like a blizzard where you don't see much snow falling.
14. When the mother of one of the main characters makes a decision based on social things, especially if it is class-related. This will almost always go against their child's wishes.
15. If a boss acts evil. If he (always a he) does something that will hurt someone else. If he leers at the girls. Or even if he just laughs a super evil genius laugh.
16. If the main characters do any modeling, give a major interview on television, or participate in a movie or music video.
17. If there is a scene in an airport. I'm not sure, but I think they always use the same airport.
18. If you see a character on the toilet.
a. Take another drink if it is one of the female characters.
b. Finish your drink if they are concerned that the male character they have a crush on can hear them on the toilet.
And finally:
19. Finish your drink when the main female character ends up choosing the WRONG GUY! It will be the guy who treats her poorly, tells her he doesn't know why he loves her, calls her plain or even ugly, criticizes her all the time, etc. Then keep drinking until you forget all about it.

That's it for now! There are a lot of other things I could've included, but this seemed like enough. This is just a generic drinking game that could work with most Korean Dramas, at least all of them that Princess Melawesome and I have watched. Originally I was going to write one specifically for Super Rookie, but as we watched more Kdramas we realized that so many of the things happen in more than one drama that a generic drinking game would work just as well.

Who wants to buy me some Soju?

Posted by sethifus at 5:44 PM No comments:

A Collection of Common Background Songs

Have you ever been watching a movie or TV show or preview and thought to yourself "Hey, this song sounds kind of familiar... I think I've heard this song before. Lots of times! In lots of movies, TV shows, and previews... What's this song called?"

I say this to myself all the time! In my Internet searches and googlings I have not found any lists of common background songs, so I am starting my own!

Here are the first five Common Background Songs that I hear a lot in movies, TV shows and previews. I plan on adding more as I think of them. Please send me any suggestions or questions about songs you hear a lot that are not on this list. I will try to find out what they are and add them!

This is the Common Background Song often heard in the background on Looney Tunes and other Warner Brother cartoons when there is an assembly line or factory setting. I thought the "Honey I Shrunk the Kids" main titles had this song as the title music, but I just listened to it again. It sounds very similar, but I think it's a different song.

If the beginning doesn't sound like the factory/assembly line music you remember, listen to the rest of the song. The first part is different from the second part.

I know this song best from "Ferris Bueller's Day Off", but it's been used in lots of movies, TV shows, and previews. I remember on some cartoon or show (I can't remember which one) they had a bunch of previews for Shelley Long movies and each one had "Oh Yeah" playing as background music.

I am not sure where I've heard this song, I just know I've heard it a lot. You have too I'll bet.

4. "Holiday for Strings" by David Rose

I know this best from the Ren and Stimpy Show. It is used whenever there is a scene showcasing home goods and vacuums and stuff, 1950's style. I like this one a lot.

And that's all I have for now! If you have any suggestions, please send them my way. I would like to eventually have an exhaustive list of all the Common Background Songs that people hear a lot, but have no idea what the title of the song is or who recorded it. That way people who want to look up such things could find them without too much trouble.

Posted by sethifus at 7:06 PM No comments: