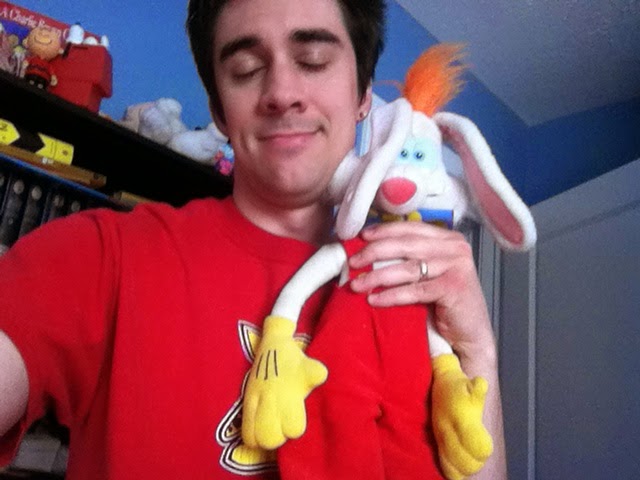 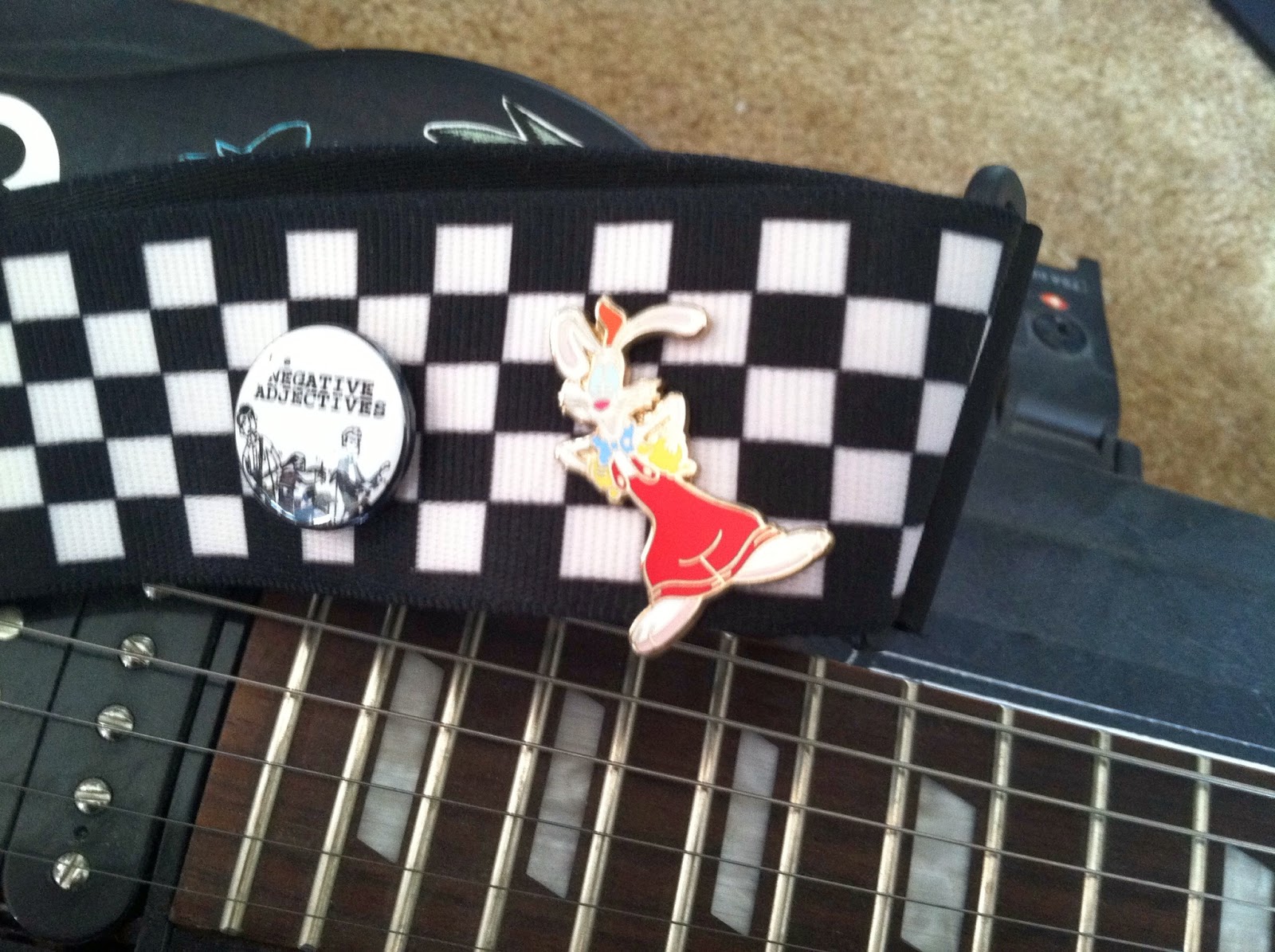 I used to have kid's books, cake decoration PVC figures, shirts, a sweatshirt, posters, toys, and lots of other great stuff I don't have anymore.
But I do still have some stuff.
I have the movie and cartoon shorts in VHS and DVD form... 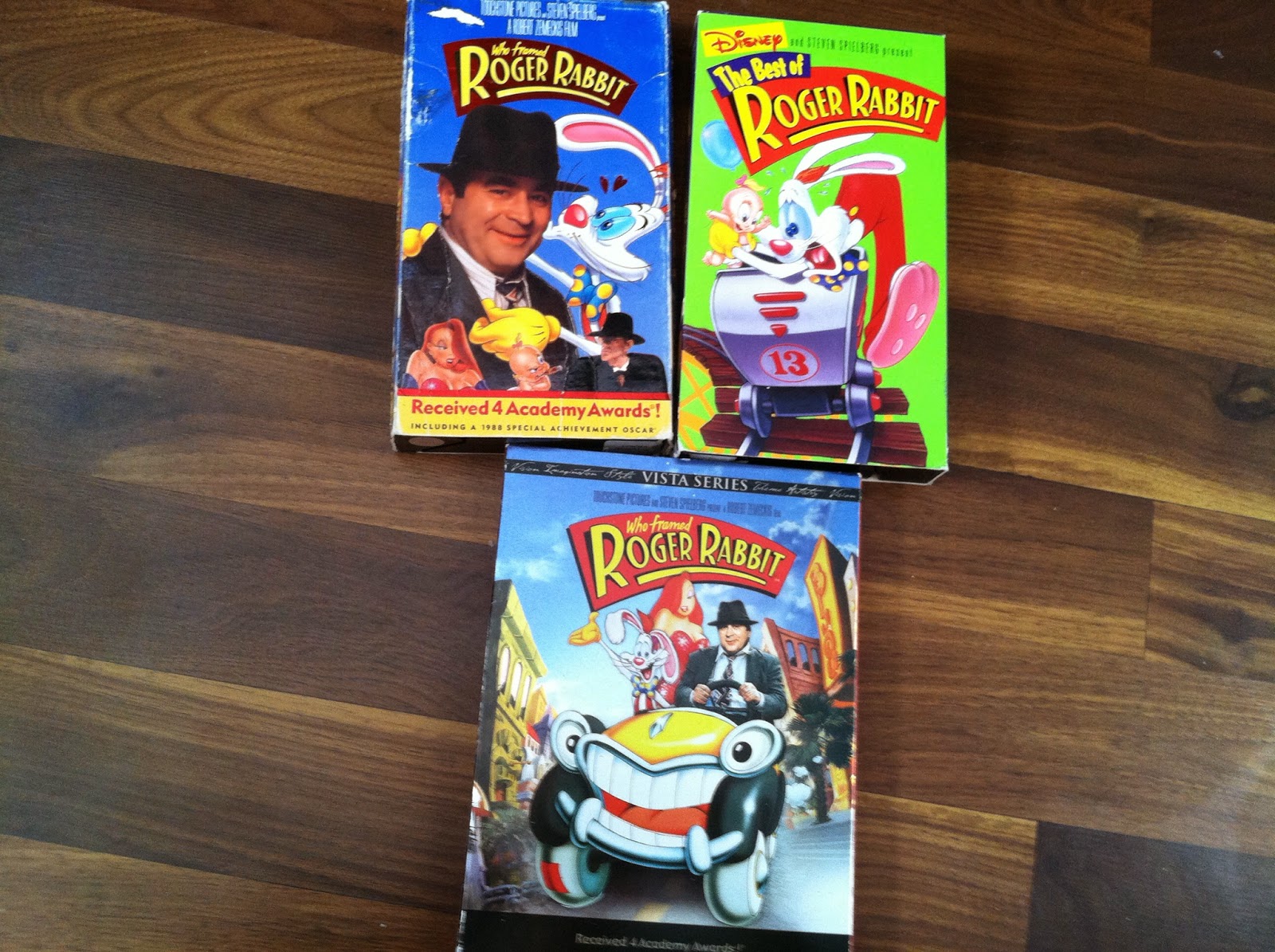 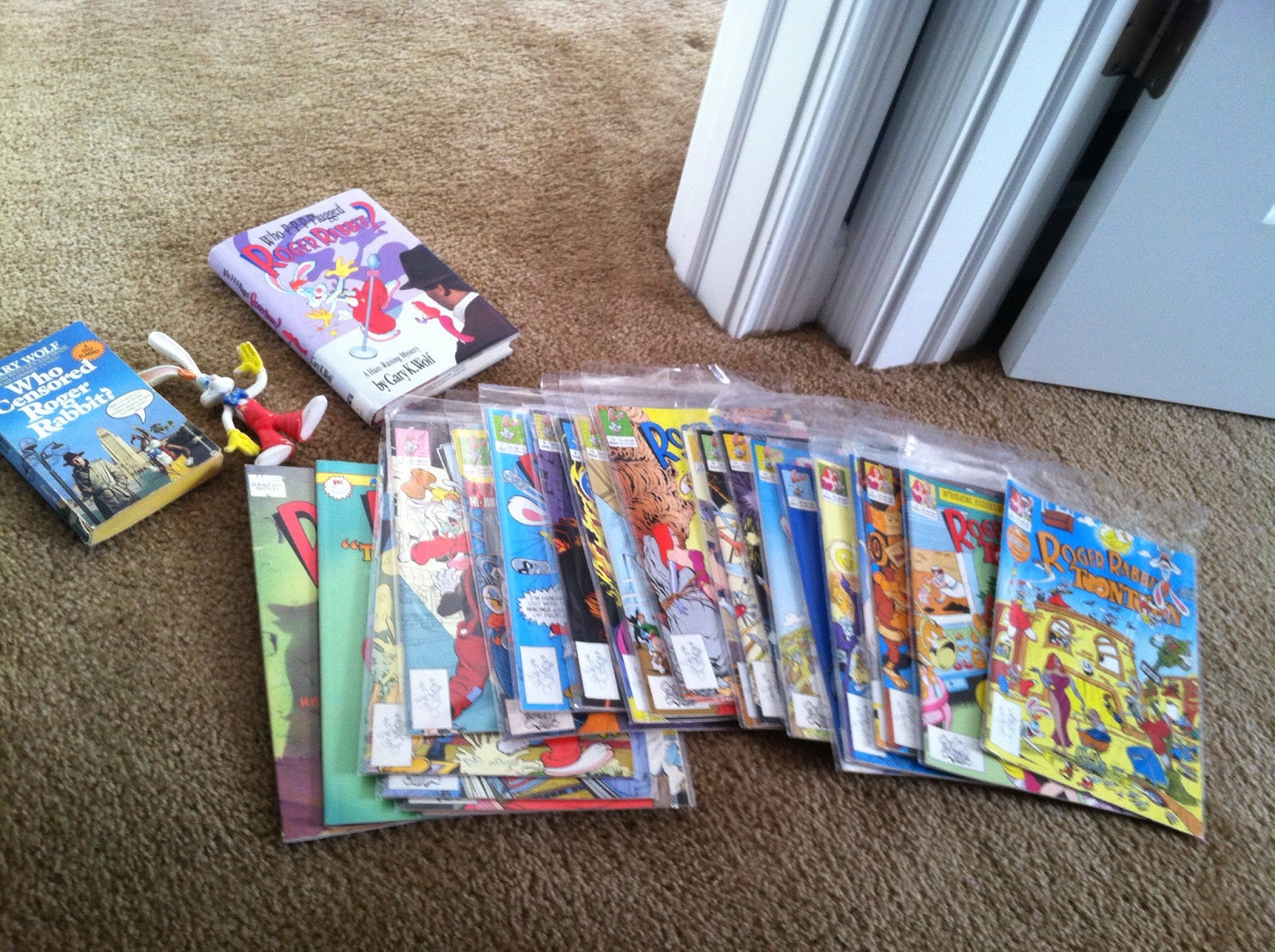 And even most (if not all) of the cards (I should put them in order). 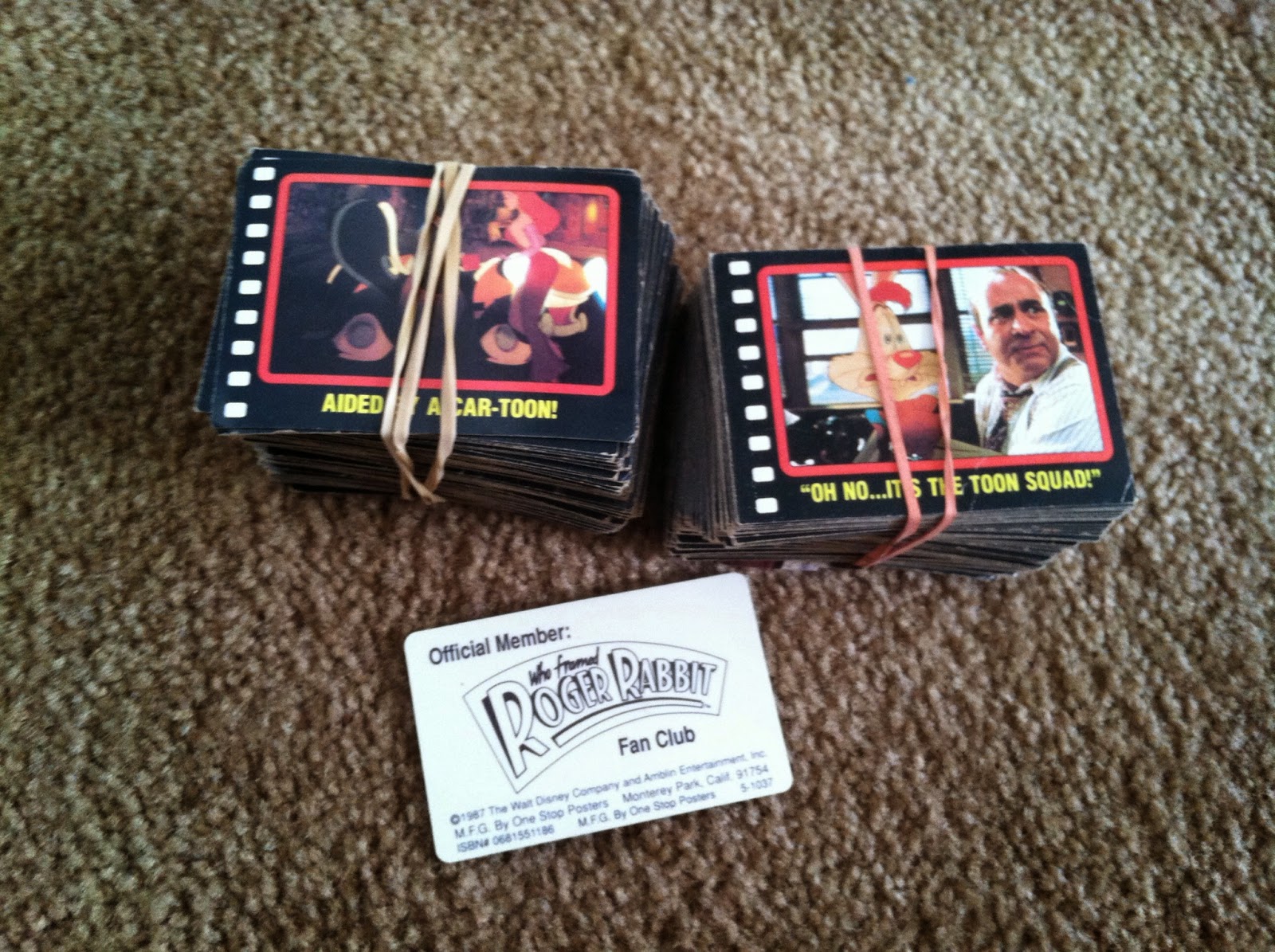 I wish they'd make another movie, but I have a feeling it will never happen.
But while I wait for the movie that will never come, here's a bunch of rare/forgotten videos I found on youtube! Enjoy them while they're still up!
First up, a Diet Coke commercial!
﻿


Next, a McDonald's commercial!

Here's "Mickey's 60th Birthday Special. Roger is in the beginning, onscreen with Charles Fleisher (his voice)!


Now, I know Topher Grace already did this on his site "Cereal Prize", but here's the collection of Maroon Cartoon shorts!


And one last silly video. Here's a Disney Sing-along Songs video with a person in a Roger costume, singing along in Charles Fleischer's voice!﻿
If you have any other rare/forgotten Roger Rabbit videos (other than the special features on the DVD/Bluray) leave them in the comments section!
Here's hoping for Roger Rabbit 2! P-b-b-b-b-b-b-lease!
﻿
﻿
Posted by sethifus at 4:28 PM No comments: 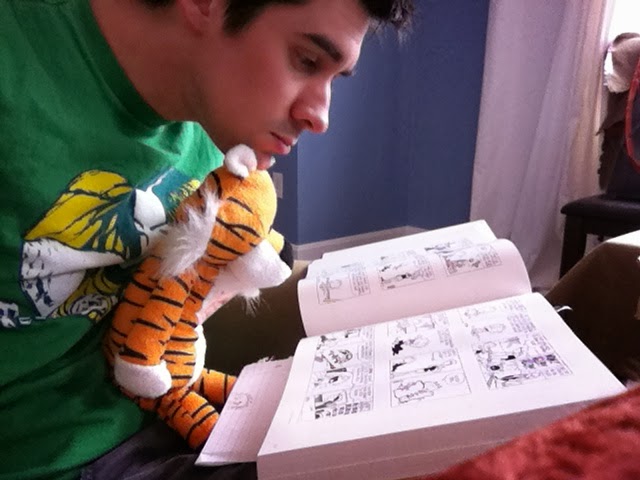 (check out other installments of Project CALVIN and HOBBES: HERE and HERE!)

It's been over a month since our last installment in the Project CALVIN and HOBBES series, but it is still March! So here is this month's Calvin and Hobbes things made real! As you can see in the picture above, my stuffed tiger Sprite and I have been hard at work coming up with our next big video or other piece in the series.

In the mean time (and for this month's last-minute installment)...

Sprite loves Hobbes and often cosplays as him. Here are a couple of his recent pics.

In the strip Hobbes often gets washed in the washing machine. 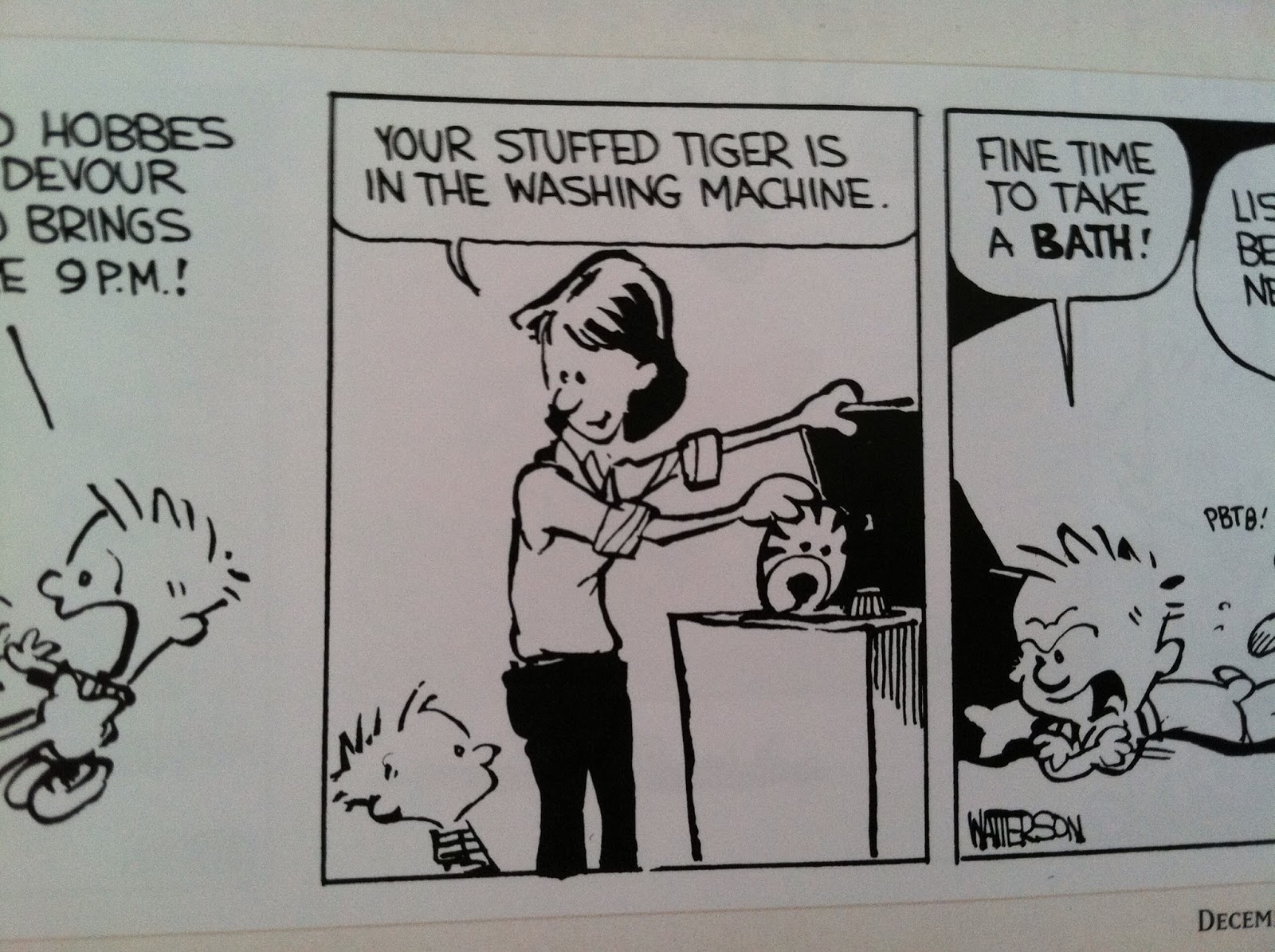 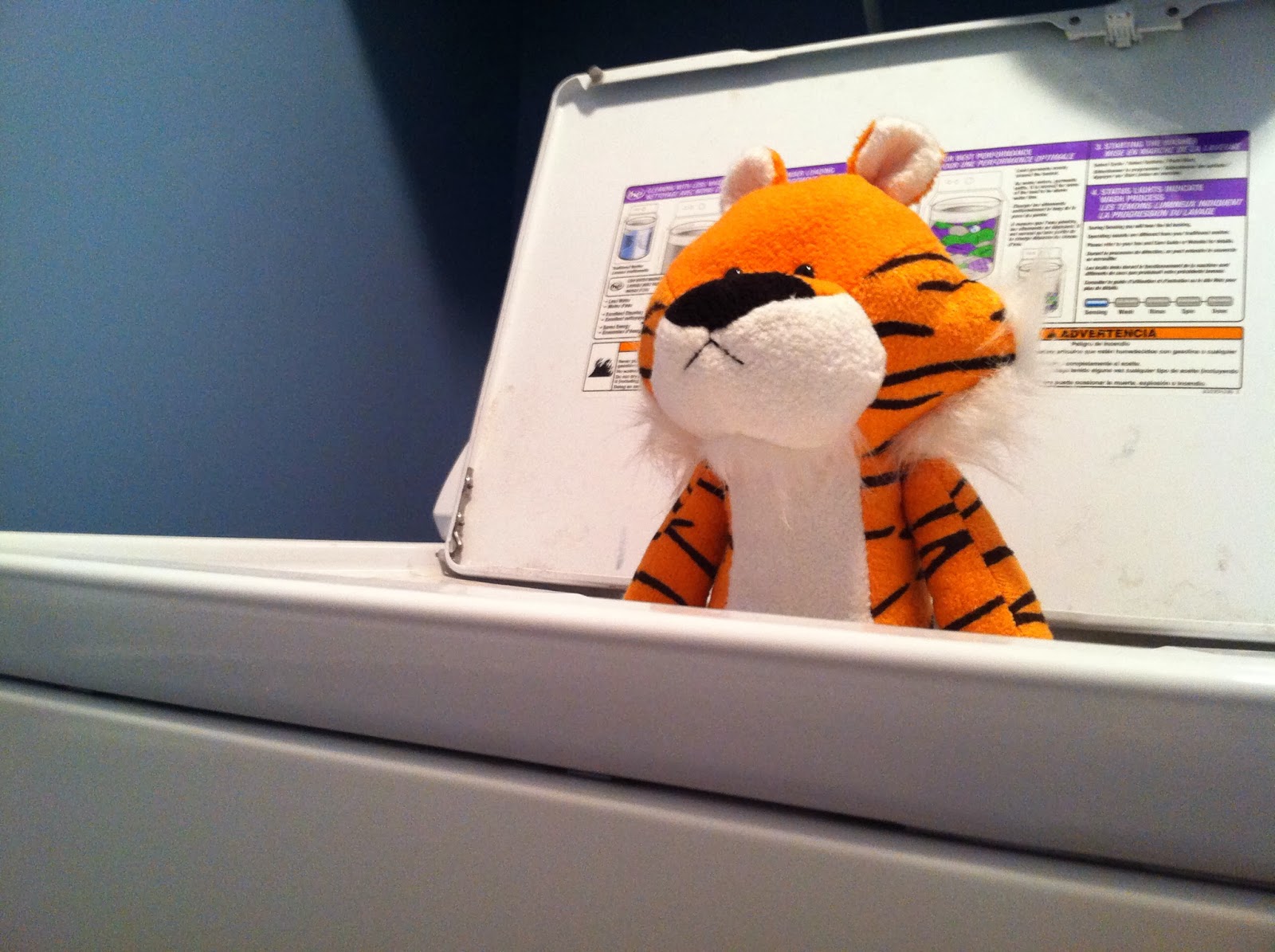 And here is Sprite cosplaying as Calvin and Hobbes trying to get into the movie "Vampire Sorority Babes". 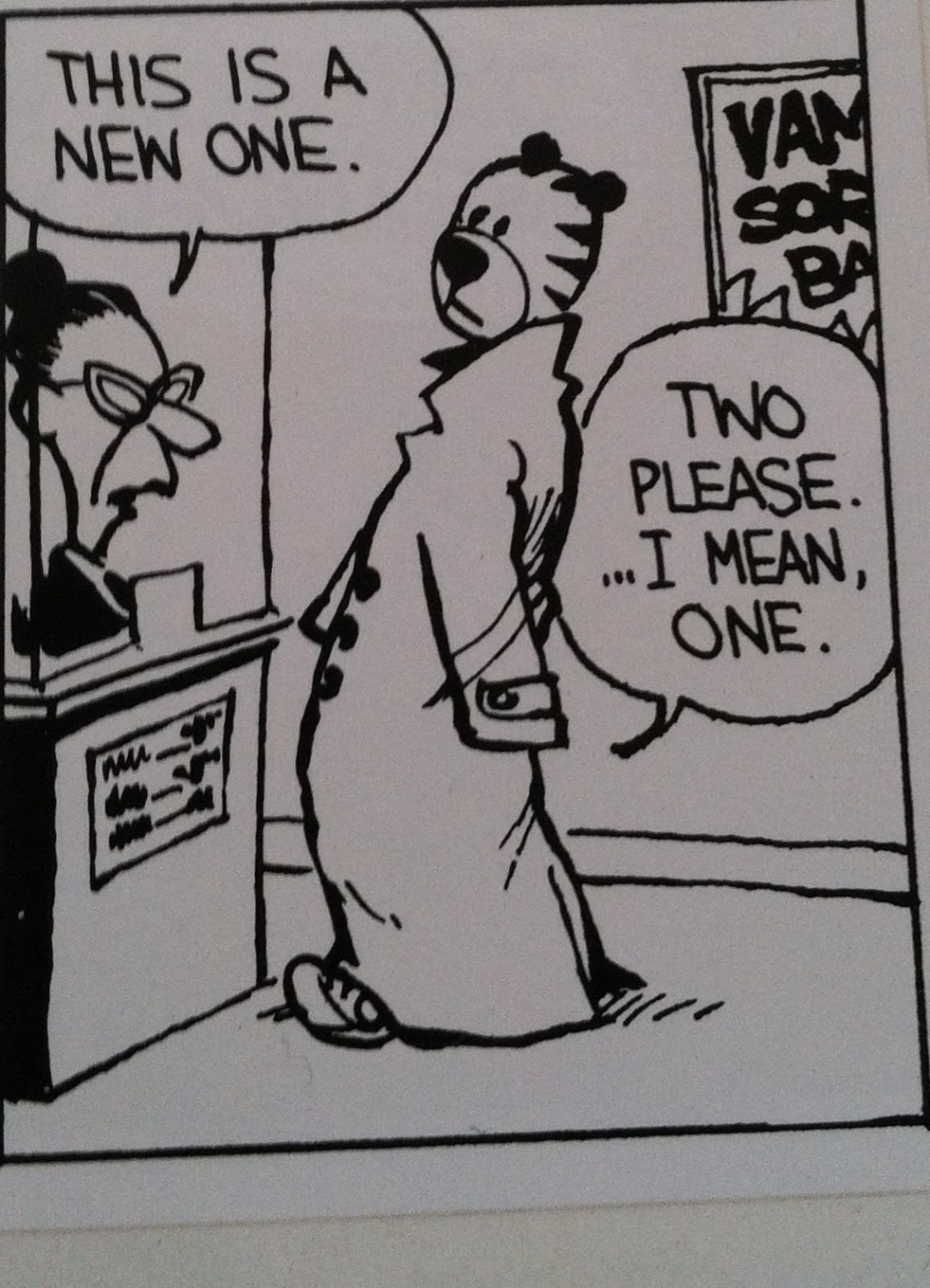 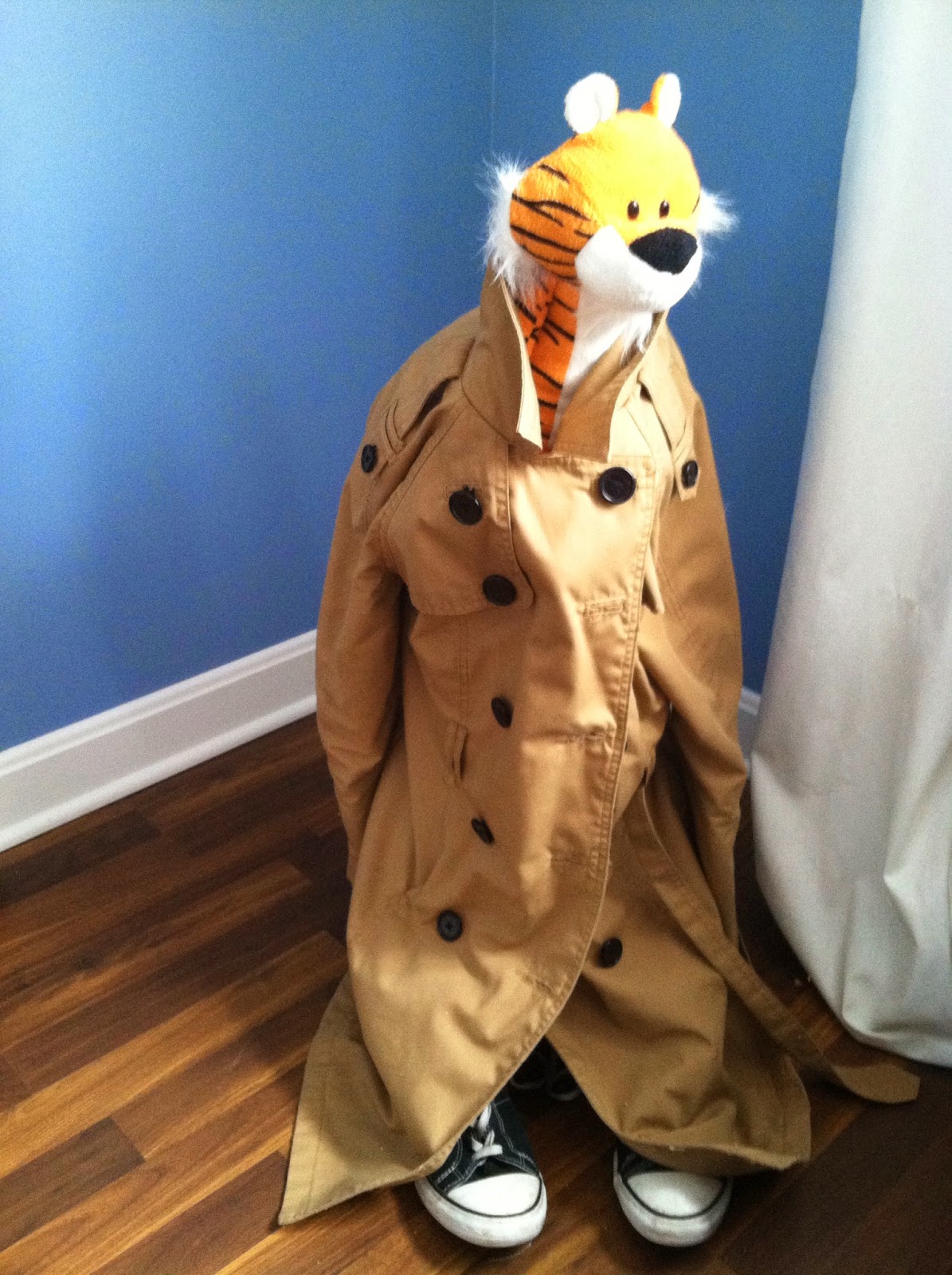 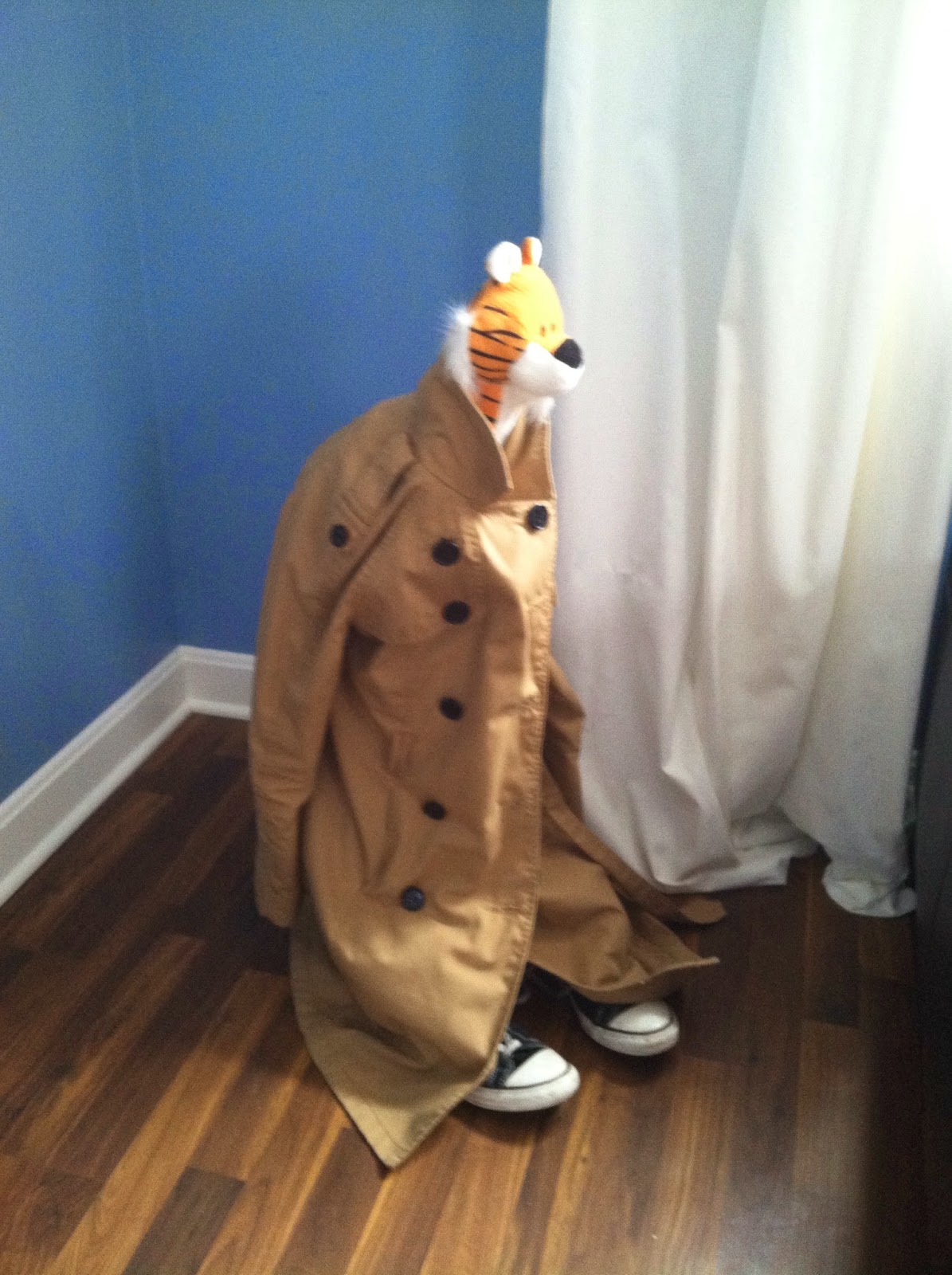 And one final picture. In the strip we find out that Calvin's shirt is made in Taiwan. 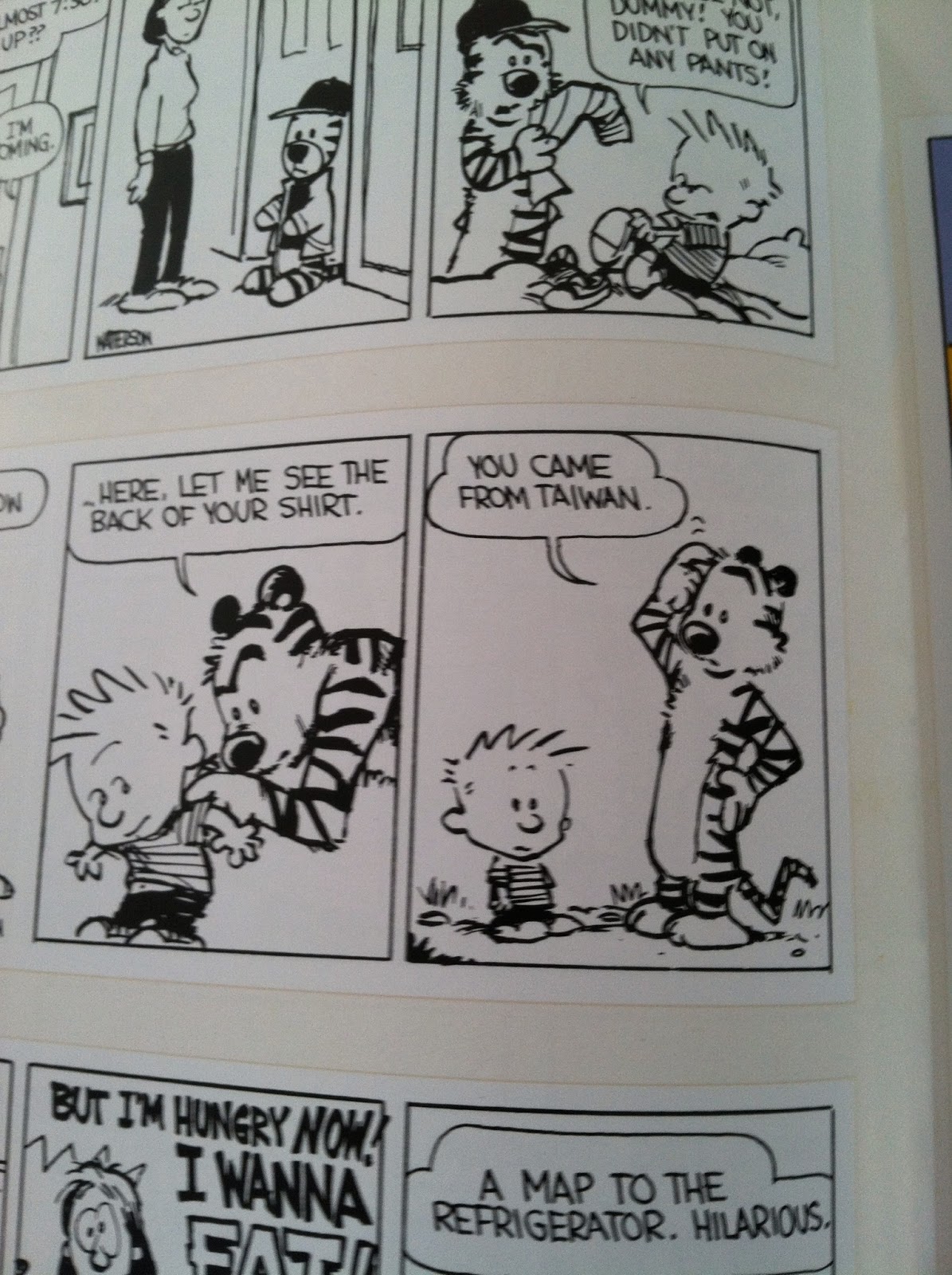 I checked my Calvin red and black stripe shirt, but unfortunately mine was made in China. 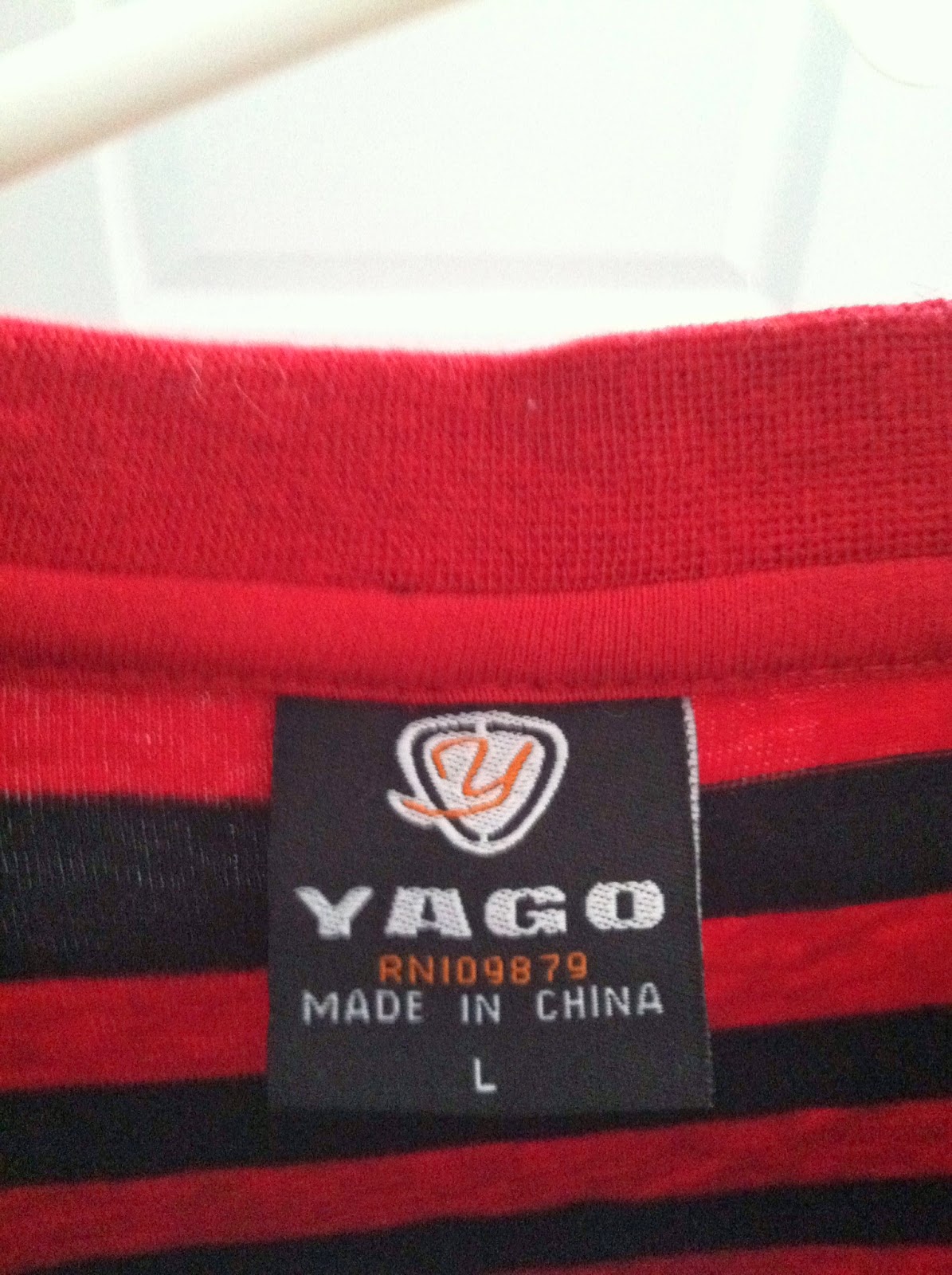 That's all for now! Thanks for looking and check back often! I hope to keep adding something to the project series at least once a month.

Feel free to send me links to your own Calvin and Hobbes creations in the comments! I would love to have others take part in Project Calvin and Hobbes.
Posted by sethifus at 1:34 PM No comments:

I like Comics! And I like Clutter! So I combined the capital C's in my interest... wheelhouse... So here's my top 3 Favorite Cluttered Comic Artists!

Jamie was half of the comicing team who birthed Tank Girl. I found out about him through the Tank Girl movie. I loved the movie and checked out the comic because of it. The comic is much, much better. But I still have a lot of affection for the movie.

Both the comic and the movie are cluttered like a crazy person. Take a look This is one of the most common pics of Tank Girl (at least according to my google search), and it is a perfect example of the kind of clutter Hewlett packs into his drawings. There is lots of weapons, stickers, roundels, tattoos, stickers, toys, and numbers. There is even a band aid, which I think always look cool in comics but bulgy and gross in real life. (pic from HERE)
I like the Gorillaz's hit songs, but I've found the other tracks harder to get into. I still love Hewlett's visuals. In the pic above you can see lots of stickers and speakers and even a gramophone. Awesome clutter.

Here is one of their most recent videos that also shows how Hewlett does clutter right:

Purcell is most well known for Sam and Max Freelance Police in all their various media. I found out about him/them/it through the Lucas Arts game "Sam and Max Hit the Road". I love everything Sam and Max because it is always funny and quirky and great. Their comics, cartoons, and games are also always cluttered. Especially any scene involving their office.

(picture from HERE)
This particular picture is one of those "what doesn't belong" kind of picture, but it is a perfect example of the kinds of things Purcell clutters into his panels. Toys, weapons, rats, insects, kitschy souvenirs, junk food, and a dartboard full of things besides and including darts.﻿ Basically, everything I love.

and
1. Evan Dorkin
Dorkin draws amazing comics that are amazingly cluttered. I found out about him through Marvel's Bill and Ted comics, but he is probably best known for Milk and Cheese. 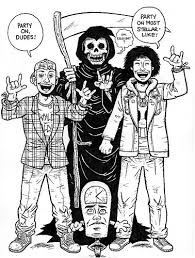 (here's a pinup he drew for me!)
﻿
I love all of Dorkin's work, from Bill and Ted to Milk and Cheese to Hectic Planet to his writing for "Space Ghost Coast to Coast" and "Beasts of Burden". One of my favorite things he has done/is doing is his "Eltingville... Club" which is all about nerds and geeks and the objects and properties of their obsessions.
Here is the excellent pilot for "Welcome too Eltingville"
You should watch it.
Here is a cluttered pic Dorkin drew 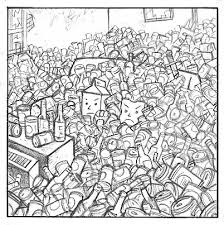 (pic from HERE)
Dorkin's clutter includes pretty much everything I've listed above plus Fisher Price Little People, alcohol, and t-shirts of bands I love.
He truly is the best Clutter Comic Artist!
Honorable mention: Geof Darrow ﻿
I know Darrow's work from Frank Miller comics. My favorite is "Hard Boiled". He would've made the top 5, if I could've come up with a 5th (but I like the number 3 better).
The only thing about Darrow is that his comics are almost too cluttered. He includes more details in his pictures than my eyes can focus on and my brain can process. He has everything above plus an unhealthy amount of advertisements, rubble, blood, sweat, scars, veins, and all that other gross stuff that you saw in the close-up shots in Ren and Stimpy cartoons. But unlike Spumco stuff his gross stuff is in EVERY PANEL.
If you are a big fan of that kind of stuff, check out Darrow's work.
For more clutter read THIS and THIS!
Posted by sethifus at 12:51 PM No comments:

Here's some more Common Background Songs! These are more well-known than some of the others I've posted so far. (See part 1 and part 2)


It's the theme from "2001: a Space Odyssey". It's been used over and over again in so many parodies.

2. "The Good the Bad and the Ugly Theme" by Ennio Morricone

3. "The Girl from Ipanema" by Antonio Carlos Jobim with lyrics in Portuguese by Vinicius de Moraes and in English by Norman Gimbel


Another song used in many, many backgrounds of many, many things. Often as elevator music... Muzak...


Used whenever someone is sneaking around.


Used in every funny romantic running-towards-each-other-on-the-beach scene ever.


Used whenever a Bossa Nova song is called for, but they decide not to use the others I've already listed.


That's it for now! What songs are missing from the list? Please leave any suggestions in comments.

Here is a link to the playlist I've created of every Common Background Song listed so far!
Posted by sethifus at 12:43 PM No comments: